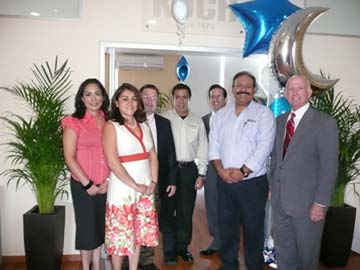 George Koch Sons is happy to announce the opening of an office in Queretaro, Mexico. Antonio Gallegos, general manager, moved to Queretaro from Evansville in July 2008 to start the Mexican operation which had its official grand opening in July 2009. Antonio’s focus is Latin America, with an emphasis on Mexico. In January, Gizella Preciado, administrative assistant, and Rigoberto Cortez, field service technician, joined the growing team in Queretaro. GKS also has a sales representative, Feliz Cruz, located in Monterrey. GKS selected Queretaro because it is located in a growing industrial area and is relatively close to some existing customers, such as ArvinMeritor and Flex-N-Gate.